Tannin: On addition of Ferric chloride to aqueous or alcoholic extract of Chirayita (Swertia chirata) no blue black color develops.

Fungi Aspergillus flavus and Aspergillus parasiticus colonize on agricultural and animal products. They produce aflatoxins. Aflatoxins are secondary metabolites. They are one of the most potent teratogens, mutagens, carcinogens and immunosuppressants. They cause some metabolic disorders resulting into damage of heart, lungs and kidney causing death both in human and animals. In present era there is increasing demand for herbal medicines in Asian and African communities. Aflatoxin contamination is a major concern, which has received worldwide attention due to their deleterious effects.

Effects on doshas: Tridosha (all the three doshas i. e. waata, pitta, kapha) predominantly on kapha and pitta. [41] 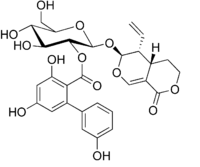 Amarogentin is secoiridoid glycoside. It is one of the most bitter compounds found in nature. It tastes bitter even at a dilution of 1: 58,000,000. It can be extracted from Chirayita (Swertia chirayita Roxb). It activates the bitter taste receptor hTAS2R50. It is used as a scientific basis for measuring the degree of bitterness of any substance. It exhibits antileishmanial chemo-preventive effects.  [44], [45]
Amaroswerin
Molecular formula: C29H30O14
Structural formula: 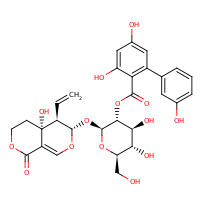 Amaroswerin is secoiridoid glycoside extracted from Chirayita (Swertia chirayita Roxb). It is gastroprotective.  [47]

Gentianine, also known as 4-(2-hydroxyethyl)-5-vinylnicotinate galactone. It is a member of the class of compounds known as pyranopyridines. Pyranopyridines are polycyclic aromatic compounds. Gentianine is soluble in water It is alkaline. It tastes bitter. It is also found in Methee-Fenugreek  (Trigonella foenum-graecum L) [48]
Gentianine is a sullen (dull), translucent monoterpene alkaloid. It possesses anti-inflammatory, analgesic, anesthetic, anticonvulsant, antipsychotic, antihistaminic, hypotensive, diuretic, antibacterial and antimalarial properties. [49] 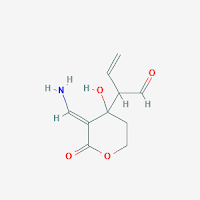 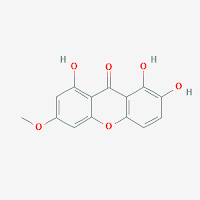 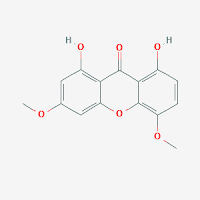 Swerchirin is the 5-O-methyl derivative of bellidifolin. It belongs to the class of aromatic ethers known as xanthones and is a member of phenols. It exhibits hypoglycemic, hepatoprotective and weak chemo-preventive pharmacological effect. [59] 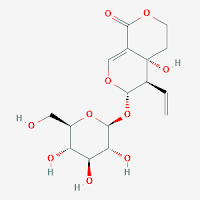 The phytochemical charantin obtained from bitter gourd/Asian bitter melon (Momordica charantia) was first identified by Lolitkar and Rao in 1960. Charantin also known as naftidrofuryl or nafronyl is a member of the class of compounds known as naphthalenes. Charantin is sparingly soluble in water but is soluble in ether, methanol and ethanol. Charantin is actually a 1: 1 mixture of two steroidal saponins, β-sitosteryl glucoside (C35H60O6) and 5,25-stigmasteryl glucoside (C35H58O6). It is a whitish crystalline substance, neutral to pH, tasteless, melting at 266-2680 C. It shows hypoglycemic activity. [61] 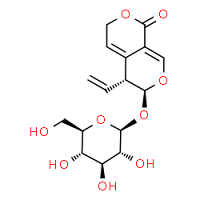 Magniferin a xanthonoid is a glucoside of norathyriol. Magniferin was first isolated from the leaves and bark of mango (Magnifera indica). It can also be extracted from peels and kernels of mango. Magniferin has antioxidant, antibacterial, gastroprotective and anti-diabetic properties.  [63]
Magniferin (2-β-D-glucopyranosyl-1,3,6,7-tetrahydroxy-9H-xanthen-9-one) exhibits antioxidant, antiallergic, immunomodulatory, antidiabetic and hypocholesterolemic properties. By enhancing the capacity of monocyte-macrophage system magniferin shows antibacterial activity against gram positive and gram negative bacteria. Magniferin protects against many human cancers such as breast, neuronal, lung and colon cancer through the suppression of tumor necrosis factor-α (TNF-α) expression, inducible nitric oxide synthase potential, inhibition of proliferation of tumor cells and induction of apoptosis. [64] 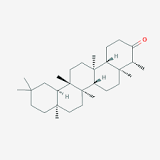 70. Jinging Jiao, Antihyperlipidemic and antihypertensive effect of a triterpenoid-rich extract from bamboo shavings and vasodilator effect of friedelin on phenylephrine-induced vasoconstriction in thoracic aortas of rats, Phytotherapy research 18 July 2007