Piperine was discovered and isolated in 1819 by Hans Christian Orsted from fruits of black and white pepper. Piperine is also found in Pippali (Piper longum). [65]

Piperine was first synthesized in 1882. It is an alkaloid. The solubility of piperine in water is 40mg/L. Piperine enhances the bioavailability of vitamins, minerals and curcumin. The mechanism of this activity is still under study. Piperine is known to inhibit the enzymes P-glycoprotein and cytochrome P450 3A4 (abbreviated CYP3A4) in humans. Animal studies also show that piperine inhibits cytochrome P450 (CYP 450) enzymes that metabolize many drugs.

Piperine raises levels of dopamine and serotonin. It induces natural sleep and serenity. It enhances memory and recall. It relieves stress. It improves metabolism and helps weight loss. By correcting malfunctioning of immune system, it improves immunity.

One may take piperine to increase effect of nutrients such as vitamins, curcumin, beta-carotene and selenium. Piperine can also be useful in respiratory distress, indigestion, joint discomfort and low mood.
Piperine can interact with many medications. It may have anti-platelet aggregation effect. It may cause GI bleeding when taken at higher than suggested doses.  [66], [67]

Piperine is a potent inhibitor angiogenesis. This property can be useful for the treatment of cancers. [70]

Piperine inhibits the proliferation of prostate cancer. However the apoptosis-inducing activity of piperine in these cells is low. Piperine induces cell-cycle arrest by down regulating cyclin D1 and cyclin A. Piperine treatment induces autophagy in prostate cancer cells. [73],

Piperine is acutely toxic to mice, rats and hamsters. The LD50 values for a single intravenous (i. v.), intraperitoneal (i. p.), subcutaneous (s. c.), intragastric (i. g.) and intramuscular (i. m.) administration to adult mice were 15.13, 43, 200, 330 and 400mg/kg bodyweight respectively. Most animals given a lethal dose died of respiratory paralysis within 3-17 minutes. Histopathologic changes included severe haemorrhagic necrosis and oedema in gastrointestinal tract, urinary bladder and adrenal glands. [74] 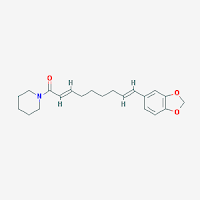 Pipernonaline belongs to the class of organic compounds known as benzodioxoles. Pipernonaline is a solid insoluble in water. Within the cell it is located in the membrane. Pipernonaline is found in many herbs and in spices. This makes pipernonaline a potential biomarker for the consumption of many food products. [76]

The methanol extract of the fruit of Pippali (Piper longum) containing pipernonaline, was found to be larvicidal against larvae of Culex pipiens    at a concentration of 10 μg /ml after 24 hours of exposure. This activity was much higher than malathion, methyl chlorpyrifos and methyl pirimiphos the three commonly used organophosphorus insecticides. [78]

A crude methanol extract of the fruit of Pippali (Piper longum) containing pipernonaline showed a strong larvicidal activity of 100% mortality of Aedes aegypti mosquito larvae. No such activity was observed with phytochemicals piperine, piperlongumine and piperettine [79], [80]

The ethanol-extract of the fruit of Pippali (Piper longum) shows appreciable antihyperlipidemic activity in vivo. This activity was attributed to piperine, pipernonalin and piperlonguminine (C16H19NO3). The antihyperlipidemic activity was comparable to simvastatin. [81]
Through production of reactive oxygen species (ROS) pipernonaline exhibits apoptotic properties. This causes disruption of mitochondrial function and induces apoptosis in prostate cancer cells. This was the first report of use of pipernonaline on human prostate cancer. [82]

Piperettine belongs to the class of organic compounds known as benzodioxoles. It is a yellow solid. It was first identified and isolated from the extract of Mareechee (Piper nigrum) and later synthesized in the laboratory. It is insoluble in water. Within the cell piperettine is located in the cell membrane. Outside of human the body piperettine can be found in many herbs and spices. This makes piperretine a potential biomarker for the consumption of these food products. Its pharmacological actions are not studied yet. [84], [85] 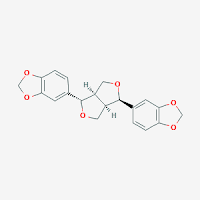 Asarinine belongs to phenylpropene family. Asarinine is a physiologically active compound exerting actions on some systems of the body.
Asarinin/Asarinine is one of the slimming dietary supplements. [87] 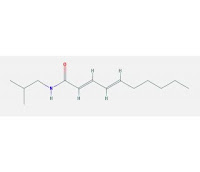 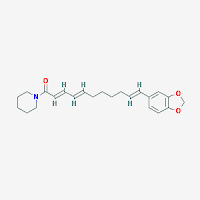 Piperundecalinide is an alkaloid. It belongs to the family of Phenylpropenes. It is found in fruits of Pippali (Piper longum) and many herbs.  [94]

Piperlongumine (PL) is a constituent of the fruit of the Pippali (Piper longum). Piperlongumine shows anti-inflammatory, antioxidant and antitumor properties. [96]

APR-246 is a novel anticancer compound under trial for the treatment of refractory hematological malignancies and prostate cancers. It is also tried for the treatment of head and neck squamous cell carcinoma (HNSCC). Piperlongumine is found to synergize APR-246. Administration of piperlongumine along with APR-246 significantly suppresses glutathione S-transferase activity resulting in the accumulation of reactive oxygen species (ROS), depletion of glutathione (GSH) and elevation of oxidized glutathione (GSSG) in cancer cells. This results in DNA damage of cancer cells and cancer cell apoptosis. [100]

Piperlongumine was found to be effective to arrest triple negative breast cancer. This activity was attributed to the activation of mitochondrial apoptotic pathway. The effect was dependent on the concentration of piperlongumine and duration of the treatment. [105]

In an in vivo setting, piperlongumine significantly reduced atherosclerotic plaque formation as well as proliferation and activation of nuclear kappa B (NF-κB) factor. [108]

Piperlongumine suppressed the growth of lung cancer cells. Most of 2-halogenated piperlongumine showed more potent antitumor activity than the natural compound as it suppressed the tumor growth by 48.58 percent at a dose of 2mg/kg body weight. This activity was attributed to the ability of these compounds to elevate reactive oxygen species (ROS) in tumor cells. [111]

Pancreatic cancer is one of the most deadly cancers with 95% mortality. The poor response to currently available therapies has drawn attention to alternative therapeutic strategies. The use of reactive oxygen species (ROS)-inducing agents has emerged as an innovative and effective strategy for the treatment of various cancers. By elevating reactive oxygen species (ROS) and causing DNA damage, piperlongumine induces apoptosis in pancreatic cancer cells.  [114]

In an experimental study, lupus-prone MRL-Fas (Ipr) female mice were treated by intraperitoneal injection of piperlongumine at a dose of 2.4mg/kg bodyweight for 10 days. The treatment significantly attenuated proteinuria and glomerulonephritis. The improvement was accompanied by decreased serum levels of nephritogenic anti-dsDNA antibodies, interleukin (IL)-6, interleukin (IL)-17, interleukin (IL)-23 and TNF- α. This study sheds new light on the immune-modulatory role of piperolongumine.  [115] 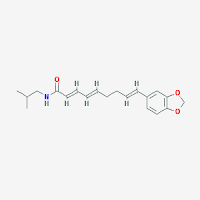 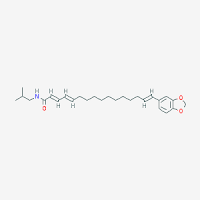 Pergumidiene was first isolated from Marichi (Piper nigrum). Later it was shown to be present in many piper species such as Piper longum, Piper cubeba. Pergumidiene showed antibacterial activity against Staphylococcus aureus, Streptococcus mutans and antifungal activity against Candida albicans and Saccharomyces cerevisiae. [124] 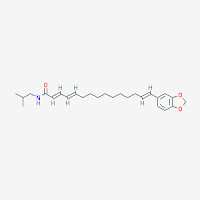 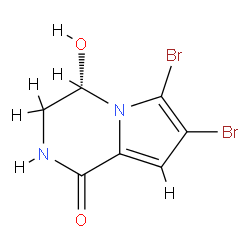 Longamide belongs to the class of organic compounds known as carboxidimic acids. Longamide exists as a solid insoluble in water. Within the cells longamide is located in the cell membrane. Outside the human body longamide can be found in many herbs and spices such as Pippali (Piper longum), Marichi (Piper nigram).   [126] 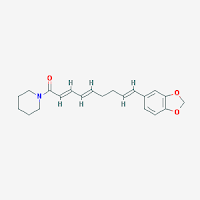 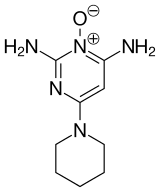 Piperidine is a colourless, water miscible liquid. Its odor is described as objectionable or that of typical amines or animal like. The name comes from Piper which is the Latin word for pepper.

Piperidine was first obtained in 1850 by the Scottish chemist Thomas Anderson and later in 1852 by the French chemist Auguste Cahours who named it ‘piperidine’. Both chemists obtained piperidine by reacting piperine with nitric acid.

Piperidine and its derivatives are used in the synthesis for new drugs and chemicals:

Piperidine is listed as a precursor of Narcotic Drugs and Psychotropic Substances due to its use in the manufacture of ‘Angel Dust’, ‘Sherms’, ‘Wet’ etc. [PCP-(1-(1-phenylcyclohexyl)piperidine] [130] 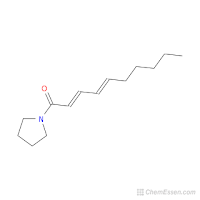 Sarmentine is a natural amide isolated from the fruit of Piper species. It is a potent herbicide. Hence it is used more in agriculture. Sarmentine has some structural similarity to crotonoyl-Co A, the substrate of enoyl-ACP reductase, a key enzyme in the early steps of fatty acid stnthesis. This activity has still remained unattended by researchers for its use in clinical medicine. [134]

Unknown said…
Pellitorine isolated from the herb of Astragalus membranaceus Bge. var. mongholicus. It may be an effective skin-lightening agent. Calycosin