Not only physicians trained in Ayurvedic system of medicine but also physicians practicing modern system of medicine are enthused to use Pippali (Piper longum). Dr. V. B. Athavale, a noted pediatrician of Mumbai, India used Pippali (Piper longum) a plenty to treat respiratory infections and bronchial asthma in children. He also used it to prevent bronchial asthma in children.

Pippali (Piper longum) ranked pari pasu as spice with black pepper on dining table. Although oblivious to day, Pippali (Piper longum) a renowned culinary spice and rejuvenating herb is worth learning about. Rarely though, it is still used as a spice in Indian and Nepalese pickles, some North African spice mixtures, Indonesian and Malaysian cooking, some National dishes of Pakistan and Lucknow. However 15th century onwards Pippali (Piper longum) made its transition from spice table to medicine-chest. [1]
The earliest reference to Pippali (Piper longum) can be found in Vedic texts. The texts mention in details its health benefits and dietary effects. [2]

Among its many uses, its effects on digestive, respiratory and reproductive systems were highlighted in ancient texts. It was combined with shunthee (dried ginger) and black pepper in the famous and popular formulation: ‘Trikatu’. References to Pippali (Piper longum) can also be found in Sanskrit poetry dated around 1000 to 500 BC due to its rampant domestic use. [3]

The fruits of Pippali (Piper longum) as drug appear to be derived from two or more species. Indian Long Pepper is Piper longum Linn or Piper prepuloides, while the Indonesian or Java Long Pepper imported from Malaysia is Piper retrofractum. Some other relevant species include Piper sylvaticum Roxb.

In the current crude drug market two varieties of Pippali (Piper longum) are available: Badi pippali (Large pippali) and Chhotee pippali (small pippali).Though both have similar medicinal properties Chhotee variety suppresses acute and sub acute inflammation while Badi variety suppresses only acute inflammation. Hence for therapeutic use Chhotee pippali is preferred. Because of its anti-inflammatory and bronchodilator property   Pippali (Piper longum) is one of the most important drug used in the treatment of Tamaka shwaasa (status asthmaticus). [7]

The word pepper itself is derived from the word pippali. The pippali plant is a native of India. The name pippali means ‘to drink and digest’ revealing one of its main benefits: Increasing the digestion and burning toxins. The word bell pepper, referring to completely different plants in the capsicum family, is of the same etymology. [8], [9]

Pippali (Piper longum) forms an important constituent of 324 Ayurvedic formulations described in various texts. Warning has also been given in Ayurvedic texts not to use these formulations for a longer duration.

Pippali (Piper longum) belongs to plant family Piperaceae. Piperaceae is a large family, having more than 10 genera and approximately1500 species. The family belongs to class dicotyledons but due to its unique anatomical features it resembles monocotyledon and at times wrongly described with monocotyledon plants. Family piper occurs throughout tropical and sub-tropical regions. [14], [15]

Pippali (Piper longum) is native of North East India. It is distributed in hotter parts of India from central Himalayas to Assam, Khasi and Mikir hills, lower hills of Bengal, Meghalaya, evergreen forests of Western Ghats of Kerala, Tamilnadu, from Konkan to Travancore and also Car Nicobar Islands.  In Western Ghat forests it grows wild. It is cultivated in North East and many parts of South India. Globally the species is distributed in the Indo-Malesian region and Sri Lanka. Pippali (Piper longum) is also cultivated in Afghanistan, Sri Lanka, Pakistan, Malaysia and Singapore. [16], [17], [18]

A number of geographical varieties of Pippali (Piper longum) are available in different agro climatic regions of India; the most popular being Assam, West Bengal and Nepal varieties. The other species: Piper officinarum DC, Chavica officinarum Miquel, Piper pepuloides and Piper chaba Hunter are of therapeutic importance. [19] 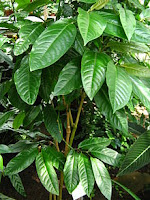 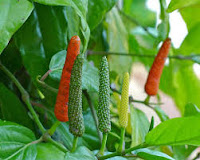 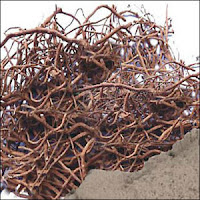 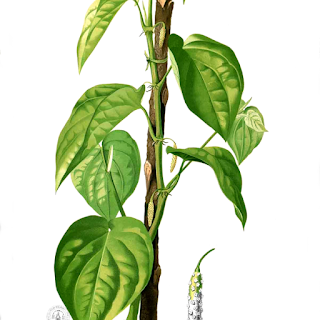 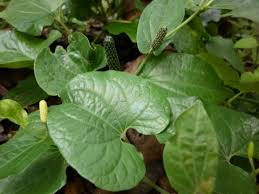 Leaves are simple, alternate, numerous, 3.7 to 8.7 cm long, upper ones oblong-oval, cordate at base, lower ones broadly ovate or very cordate with broad rounded lobes at base. All leaves subacute, entire, glabrous, thin, bullate (covered with rounded blister like swellings) with reticulate venatation sunk above and raised beneath, young leaves having 5 veins, dark green and shining above pale and dull beneath; petioles of upper leaves very short or none (sessile), petioles of lower leaves 2.5 to 7.5 cm long, stout, Stipules about 1.2 cm long, membranous, lanceolate, obtuse, enclosing the bud but soon falling off; apex acute to acuminate; margin entire. [30], [31] 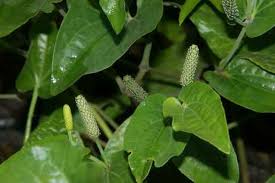 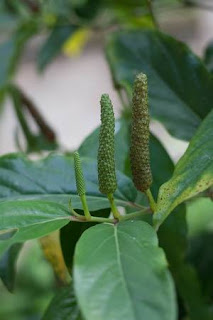 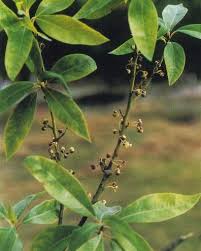 Microscopic structure
(A) Fruits:
The fruits are arranged in circle on a central axis, each having an outer epidermal layer of irregular cells filled with deep brown content and covered externally with a thick cuticle; mesocarp consists of larger cells, usually collapsed, irregular in shape and thin-walled; a number of stone cells in singles or in groups present; endocarp and seed coat fused to form a deep zone, outer layer of this zone composed of thin-walled cells and colourless, inner layer composed of tangentially elongated 105 cells, having reddish brown content; most of endocarp and seed coat fused to form a deep zone with hyaline content in the outer layers and orange red pigment, wavy in outline filled with starch grains, round to oval measuring 3-8 μ in diameter.

Microscopic Structure of Root
The transverse section of root shows outer cork, middle cortex and central stealar region. The transverse section is almost circular with regular outline. The outermost tissue, cork appears as a narrow strip slightly brown in colour. It consists of 3 to 5 rows of thin-walled and rectangular to slightly elongated cells. The phallogen is not evident in many specimens. The cortex within is fairly wide. The cortical cells are large in size, thin walled and rounded to oblong with large intercellular space. The cell walls of peripheral rows are slightly thickened but not lignified. Most of the cells are heavily loaded with spherical or oval shaped, compound starch grains. Many secretory cells filled with yellow large globules are scattered in cortex.
Centre pith of the root is occupied by 4-6 wedge shaped radiating strips of vascular tissue called stealar region having their wider ends towards periphery. The cells comprising the pith are polygonal, thin-walled and full of starch grains. Outside the pith, evenly spaced six groups of primary xylem bundles are present. In each vascular strip the xylem is composed by xylem vessels and xylem parenchyma surrounded by woody fibers. Wider end of xylem is crowned with hemispherical strip of phloem. These xylem vessels are arranged together in 3-4 radial rows. Few thick-walled xylem parenchyma cells are there with wood fibers. A cambium-strip consists of one or two rows of narrow, thin-walled rectangular cells between xylem and phloem. The phloem is composed of many sieve tubes with their companion cells that can be distinctly made out towards the inner region of phloem and phloem parenchyma cells. The cells on the outer side are slightly compressed and tangentially elongated. One or two groups of stone cells are seen at the peripheral region of phloem. The outer border of phloem is limited by a row of pericyclic cells found just inside the endodermis. Medullary rays are four to six, broad, wedge-shaped with wider ends at the periphery, alternating with radiating bands of vascular tissue. Each ray is having ten to fifteen cells extending from pith to endodermis. The ray cells are thin-walled, cubical, slightly elongated, arranged in regular rows. Most of the cells are heavily loaded with starch grains similar to those present in cortex. Some cells contain minute calcium oxalate crystals. Few cells have oil globules. In some specimens narrow strips of inner fascicular cambial cells connecting the fascicular cambia             are found in the vascular strip. Large quantities of compound starch grains are specific to pippali (Piper longum Linn.)  [44]
Powder microscopy of Root
In specimens studied root powder showed cork in surface view, parenchyma cells with simple and compound starch grains, prismatic and rod shaped calcium oxalate crystals, annual vessels having pitted borders, fragments of lignified fibers and sclerides distributed throughout powder. [45]

The main lignans isolated from the fruits are: sesamin, pulviatilol and fargesin

The vitamins isolated from Pippali (Piper longum) are Vitamin A, C, and E

Table 5: Composition of primary metabolites: Values in mg/g of fresh part of the plant

Alcohol-soluble extractive:        Not less than 5 percent

HPTLC analysis was used to evaluate various phytoconstituents in Pippali (Piper longum L.). The samples of fruit material were subjected to phytochemical tests for alkaloids, glycosides, phenols and tannins to confirm literature reports of phytonutrients of the plant. The researchers were able to estimate the quantity of piperine in fruit of the plant. [58]

Pippali (Piper longum Linn) is useful for the treatment of:

[57] Hiroshi Okada, Karyomorphology and relationships in some genera of Saururaceae and Piperaceae, The botanical magazine= Shokubutsu-gaku-zasshi, September 1986, Vol 99, Issue 3, 289-299