Introduction
This well-known table delicacy may be found wild on the coastal strands and cliffs in the South-west of England, especially near the Lizard, in the Isle of Anglesey, otherwise it is a rare native. In the southern parts of Russia and Poland the waste steppes are covered with this plant, which is there eaten by horses and cattle as grass. It is also common in Greece, and was formerly much esteemed as a vegetable by the Greeks and Romans.  Now it is a common garden perennial.
Because of the prickly nature of the foliage, the fronds have been used in Greece to stuff up the holes of mice and rats.

An old Chinese custom was to save the best roots for family and friends in the belief that it would increase feelings of compassion and love. [1], [2], [3]

This perennial plant native to India, Asia, most of Europe, northern Africa and to the Mediterranean area is now ubiquitous. It grows with a heel (wild, uninhibited) in the salt marshes of Europe and Asia. It is now widely cultivated as a vegetable crop.

The plant prefers light (sandy), medium (loamy) and heavy (clay) soils and requires well-drained soil. It prefers acid, neutral and basic soils and can grow in very acid, very alkaline and saline soils. It can grow in dappled shade or no shade. It requires moist soil. It is hardy and not frost tender.

Because of its multiple uses, the demand for Shataawaree (Asparagus racemosus, Asparagus officinalis) is constantly on rise. Because of destructive harvesting, combined with habitat destruction, and deforestation, the plant is now considered “endangered” in its natural habitat.  [7], [8] 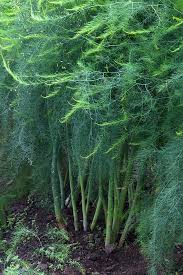 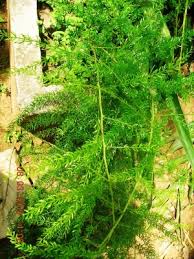 Shataawaree (Asparagus officinalis) is a herbaceous, climbing, perennial, flowering plant. It grows in low jungle areas to 100-150 cm in height. 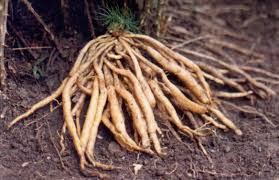 Roots constitute the massive underground part of the plant. The plant has an adventitious root system with tuberous roots that measure about one meter in length, tapering at both ends.

Rhizomes are fleshy and fibrous 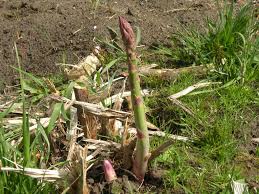 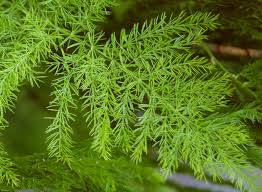 
Leaves are in fact reduced to small scales or needle-like cladodes (modified stems) in the axils of scale leaves; they are 6–32 mm long and 1 mm broad, and clustered 4–15 together. 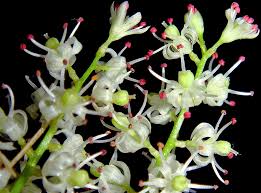 Flowers are bell-shaped, white, greenish-white to yellowish, 4-5 mm long, with six sepals partially fused together at the base; they are produced singly or in clusters of 2-3. The flowers are dioecious as male and female flowers bloom on separate plants, but sometimes hermaphrodite flowers are found. 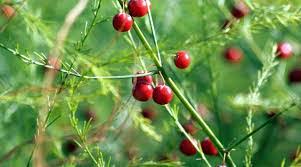 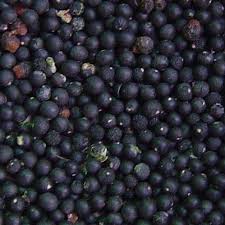 The main constituents include inulin, asparagusic acid, and eight fructo-oligosaccharides. The two glycosides and nine steroidal glycosides named asparagosides (A to I.)

Other constituents include asparagine, tyrosine, succinic acid, arginine, a methylsulfonium derivative of methionine, flavonoids (rutin, quercetin, kaempferol), saponins and their glycosides including a group of 18 known asparagosdies; 2 bitter compounds called officinalisins which are rich in acidic compounds, glycolic acid.


Fleshy root, rhizome.  In Europe and Asia, however, all parts of the Asparagus plant have a medicinal history.

Table showing phytochemicals present in various parts of the plant

In Ayurvedic medicine it is considered Madhura (sweet), Tikta (bitter) and Sheeta (cold). The tuberous root is benevolent to the lung and kidney.
In Chinese medicine it is used as a yin tonic, nutritive, diuretic, expectorant and demulcent. It is used to treat dryness of the lungs and throat, consumption (tuberculosis) and hemoptysis. Counters thirst, treats kidney yin deficiency and alleviates backache.

Asparagin a diuretic imparts a characteristic odor in those who lack the gene to break it down. Asparagusic acid is nematocidal, glycolic acid is diuretic.

Tin in Shataawaree (Asparagus officinalis) has an affinity for the thymus and the other nutrients are important for pineal, adrenal and thyroid glands (i.e. PNI system) as well as major organs like heart, liver, spleen, lungs, pancreas and skin.

In early times it was regarded as a panacea.

It has been used as a medicine from very early times owing to its delicate agreeable flavor and diuretic properties.

It is believed to have aphrodisiac properties.

The plant contains asparagusic acid, which has nematocidal properties. Hence used in the treatment of schistosomiasis
The roots are antispasmodic, anti-inflammatory, aperient, laxative, demulcent, sedative, tonic. [16], [17], [18], [19]

Only the young tender shoots of Asparagus are cut and eaten in the spring.

Shataawaree (Asparagus officinalis) has been used from very early times as a vegetable. The ancient Egyptians, Greeks and Romans ate it fresh when in season and dried the vegetable for use in winter.

In cooking Shataawaree (Asparagus officinalis) if proper precautions are not observed food poisoning may be dreaded. In Australia in 1991, a case of botulism borne on asparagus was recorded.

Since eons, desirous of 100 husbands, for their better physical and mental wellbeing, Shataavaree has been beckoning men (males??) to 'use' her, and for better nourishment of their children, has been beseeching the expectant and lactating mothers to 'consume' her.
Traditionally-----
1. Has been used as an uricose uric for helping dissolve uric acid deposits in the extremities (i.e. gout).
2. Has been used for cystitis, pyelonephritis,
3. Anti-inflammatory action of steroidal glucosides, is taken advantage of in rheumatoid arthritis, gout.
4. Has been used in Chinese medicine to treat worm infestation such as schistomiasis AKA "swimmer's itch". (Probably a component asparagusis acid is useful).
5. Considered a sedative for the nervous system.
6. Powdered seeds have been used to relieve nausea, dyspepsia, and vomiting
7. Shoots and flowering tops are diuretic and have been used to treat urinary lithiasis.
8. Water from steamed asparagus stalks has been used to cleanse the skin morning and night and to remove blemishes. The juice has been used for acne or any "acid" body condition.
9. The decoction of the root, boiled in wine and taken internally was said to be good to "clear the sight" and that if held in the mouth would ease toothache.
10. In Chinese medicine it is believed to calm the emotions, eliminate stress and tone the heart.

In 1991 Italian researchers reported that a compound had shown some antiviral activity in test tubes.

Shataawaree (Asparagus officinalis) increases glomerular function in kidneys, increasing the rate of urine production. Hence it has been employed as a diuretic for edema especially in Congestive Cardiac Failure (CCF), oliguria and in Chronic Kidney Disease (CKD); to reduce the intensity of urinary colic from calculi and from urinary infection. It was used as diuretic to treat hypertension. [20], [21], [22]

Some of the constituents of asparagus are metabolized and excreted in the urine, imparting it a peculiar odor. This is due to various sulfur-containing degradation products like thiols, thioesters (S-methyl thioesters) and ammonia. Though every individual produces the odorous compounds upon eating, it can be detected in only about 40% of individuals who have inherited a particular autosomal dominant trait.

The Commission E approved the use of infusion of Asparagus root in irrigation therapy for UTI and for prevention of kidney stones.

Traditionally, the root has been used as diuretic, laxative, and to treat neuritis and rheumatism.

Spirostanol glycoside from Shataawaree (Asparagus officinalis) fruits are useful as lipid lowering agents and hence can be used as an anti-atherosclerotic agent.

Shataawaree (Asparagus officinalis) being galactogogue and immunomodulator it is useful for lactating mothers.

The root is diaphoretic, strongly diuretic and laxative.

An infusion is used in the treatment of jaundice. The roots are said to be able to lower blood pressure.

Some testimonials from indexed scientific journals

CAUTION: Berries harmful if eaten. NOT to be used in cases of kidney "inflammation" since it provokes more urine to be produced. The plant can irritate sensitive skin causing a rash when handled.

Some authorities caution about its use in ‘inflammatory kidney diseases’ saying ‘No irrigation therapy if edema exists because of functional heart or kidney disorders.’
In rare cases, allergic skin reactions have been reported. [30], [31], [32]

To make Tincture: Express juice from 2.5 Kg fresh Asparagus; simmer till reduced to 500 ml, strain and add 500 ml of 90 proof alcohol (vodka, etc). (OR: 150grams of dried tops can be used to prepare a tincture in the usual way). To be taken in 2.5 ml doses (Recommended by Dr. S.J. Jefferson of Great Britain)
To make Decoction: 24 Asparagus stalks; wash and cover with 1litre  of water; bring to boil; lower heat; simmer till liquid reduced by half; cool, drain. 15 ml to be taken every 4 hours.
Juice: 8 stems yield about 50 ml juice; mix with tomato or vegetable juice. It is used for Acne or any "acid" body condition.
High potassium drink: 4 carrots, 1-2 stalks asparagus, 1 stalk celery; process in juicer; it makes about 200 to 250 ml of drink.

The Ancient Indian Surgeon Sushruta recommended the use of the pulp of rhizome and stem to be taken with milk for internal hemorrhoids, for fissures in ano and chronic colitis.

As a diuretic the water from the steamed asparagus has been drunk and taken also for kidney "congestion" along with eating the steamed stalks. Both roots and shoots have a stimulating action on the kidney and liver and increase flow of fluids from the body. A

Eating asparagus and its watery juice is good for helping dissolve uric acid deposits in the extremities (i.e. gout) and is also useful for hypertension. [33], [34], [35]