There is no agreement among experts regarding the descent of Ginger/Shunthee (Zingiber officinale). Mabberley (1997) believed it to be a cultigen of Indian origin. [Cultigen is a plant species or a plant variety known only in cultivation with no known wild ancestor]. The first documented reference to the plant Ginger (Zingiber officinale) is in Hortus Indicus Malabaricus by Van Reede, using the local name Inschi. The genus Zingiber was described by Boehmer and Ludvig in 1790. The scientific name Zingiber officinale was given by the English botanist, William Roscoe in 1807. Roxburg described eleven species of Indian Zingiber. A much fuller survey of Indian Zingiberaceae was undertaken by Baker in 1882 for “The Flora of British India”.

The family Zingiberaceae is composed of 50 genera and around 1500 species of perennial tropical herbs.

The plant we now know as Ginger (Zingiber officinale) was first described by Carl Linnaeus as Amonum zingiber. The genus name Zingiber is now used as synonym for Amonum.

As the species name zingiber could not be used to avoid repetition of the genus name Zingiber, officinale was adopted as the name of the species. The epithet officinale is Medieval Latin word used for medicinal substances, mostly from plants. 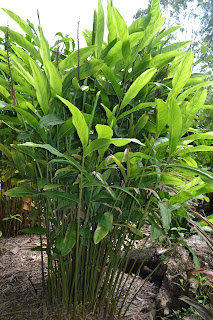 Plant
Ginger (Zingiber officinale) is herbaceous perennial plant. It is erect, slender herb usually grown as an annual crop. The plant is about 1 to 1.25 meters tall. 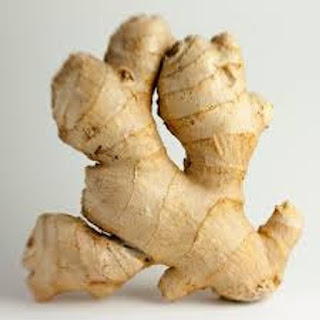 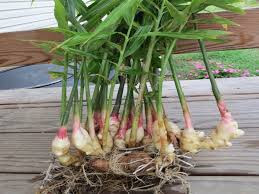 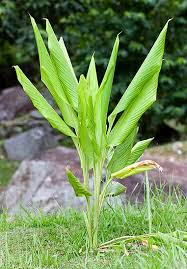 Leaves
Leaves lanceolate, acute, smooth, 5 to 6 inches long, about 1 inch in breadth,    arranged alternately in two opposite vertical rows (distichous); sheath prominently veined, densely appressed (pressed close to, fitting closely), pilose (covered with long soft hairs), especially in the upper part, with white, scarious, glabrous margins; ligule, part of the leaf that is found at the junction of the blade and sheath of the leaf up to 5 mm long, bi-lobed, glabrous to sparsely pilous, scarious; blade linear to lanceolate, up to 30 cm x 2 cm, acuminate at apex, finely parallel-veined, glabrous above, scarcely pilose below, light to dark green. 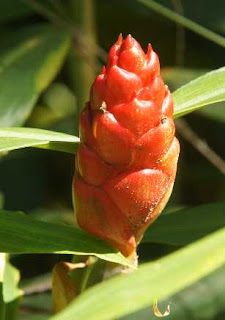 Inflorescence
The inflorescence arises direct from rhizome, spiciform (shaped like a spike), 15 to 30 cm long; scape (a peduncle arising at or beneath the surface of the ground) slender, 10 to 20 cm long, below the spike covered with scales as on the leafy stem bases, the upper ones sometimes with short leafy tips; spike ovoid to narrow ellipsoidal, 4 to 7 cm x 1.5 to 2.5 cm, light green; bracts appressed, ovate to elliptical, 2 to 3 cm x 1.5 to 2 cm, yellow-green, margin scarious, incurved, the lower ones with slender whitish acute tips, glabrous, finely parallel-lined; in the axil of each bract one flower may be produced. 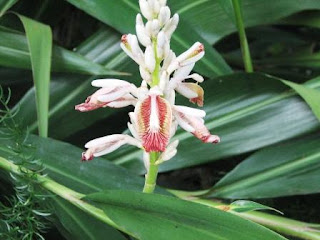 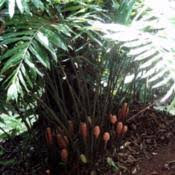 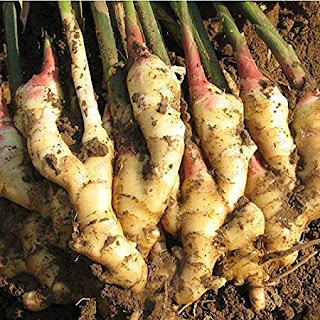 Microscopic characteristics
A) Transverse section of rhizome shows cortex of isodiametric thin-walled parenchyma with scattered vascular strands and numerous isodiametric idioblasts (an isolated plant cell, having various functions, different from normal cells) about 40 to 80 μ  in diameter containing a yellowish to reddish-brown oleo-resin, endodermis slightly thick walled, free from starch immediately inside endodermis a row of nearly 138 continuous collateral bundles usually without fibers, stele or stela (central core of stem or root) of thin-walled parenchyma cells, arranged radially around numerous scattered collateral vascular bundles, each consisting of a few unlignified, reticulate or spiral vessels up to about 70 μ in diameter, a group of phloem cells, unlignified, thin-walled, septate fibers up to about 30 μ wide and 600 μ long with small oblique slit, like pits present, numerous scattered idioblasts, similar to those of cortex, and associated vascular bundles, also present, idioblasts about 8 to 20 μ wide and up to 130 μ long with dark reddish-brown contents; in single or in axial rows, adjacent to vessels, present, parenchyma of cortex and stele packed with flattened rectangular, ovate starch grains, mostly 5 to 15 μ – 30 to 60 μ long and about 25 μ wide and 7 μ thick, marked by five transverse striations. [23]
B) The transverse section of rhizome shows a zone of cork tissue which is differentiated on the arrangement of cells. The outer zone of cortical cells in the cork are suberized (deposited with suberin which can be stained with fluoral yellow) without division and hence are irregularly arranged.

The inner zone contains cortical cells arranged in a radial row and produced by tangential division. The cork cambium (partially undifferentiated cells for plant growth found between xylem and phloem) is not differentiated.

Inside the cork is broad cortex composed of cortical cells. The cortical cells contain plenty of simple, ovoid starch grain 5 to 60 μm (micrometer=micron) in size which can be stained with iodine. The outer cortex is composed of flattened parenchyma. The cortex holds suberized oil cells containing yellow-brown oleo-resin. The inner cortex consists of three layers of closed, collateral vascular bundles of phloem. The larger vascular bundles are protected in a sheath of non-lignified fibers. The vascular bundles contain sieve tubes and xylem vessels with reticulate thickened vessels, which are sometimes accompanied by secreting cells containing dark secretions.

Inside the cortex lies a single layer of endodermis which is devoid of starch.

Going inwards further from the endodermis lies the outermost layer of stele which is characterized by a single-layered pericycle. The vascular bundles of stele resemble those of cortex with the exception of a ring of small scattered bundles within the pericycle. The stele is mainly composed of parenchyma containing starch and oil cells similar to the cortical parenchyma. The innermost vascular bundles of stele may contain a fibrous sheath. [24]

Quantification of phytochemicals found in Ginger (Zingiber officinale) has been done by HPTLC analysis.